Hi, so it’s been awhile as I honestly haven’t had much to write about, but this week we installed the new window display at work. I’ve always loved visual merchandising so getting to  change the window display is my idea of a great day.

For those of you who don’t know, I manage The Cotswold Company showroom in Norwich and we sell some lovely oak and pine furniture and our previous window had been kitchen based  with cupboards and islands to tie in with Bake Off. Now we are mid November, it’s time for Christmas!! I know many people think Christmas shouldn’t start until December, but this is retail, we’re always a season ahead, so live with it lol.

I get given a brief from the lovely Lynsey in our Marketing department who has such an artistic eye it’s untrue. The theme she has chosen this year is white white white. Very crisp, clean but full of abundance with lights and presents galore. The set up is a white bed and blanket box in one window and a storage range in the other. I get given a budget and a list of props to buy to dress the display so I had ordered lots of stuff from good old Amazon and we had done some prep in getting the furniture ready and also the crafty bit of cutting out loads of paper snowflakes to stick in the window. I could now make paper snowflakes blindfold I’ve made so many for this window.

We started off by emptying the window plinths and moving in the single bedstead into one side as this was the biggest item and we needed it out of the way. I left Rob to put up the lights on the back wall as I really haven’t the patience, although thankfully we had rolled them around a cardboard tube last year so the weren’t tangled up as nothing is worse than a great big ball of tangled fairy lights. I started on the main task of Operation Snowflake which entailed filling all the top windows with paper snowflakes. I had bought some proper fold out ones as well as the Blue Peter versions we had made ourselves the week before. 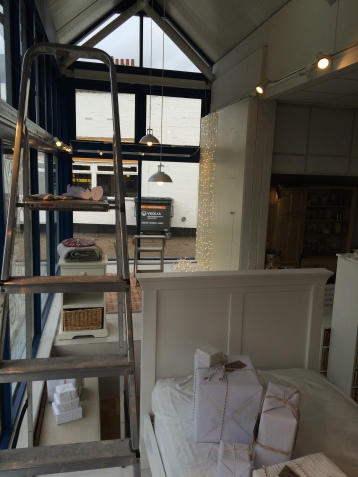 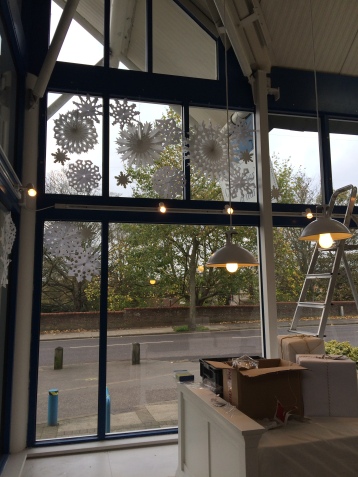 The snowflakes took an eternity to finish and the silly things didn’t want to stay stuck in the window even with super strength glue spots. Once this somewhat tedious bit was finished though, we could concentrate on the more fun part of getting the rest of the furniture in and dressing it all. I concentrated on the bedroom window and left Rob to do the other one. Each one needed a backdrop of a curtain of lights and paper chains and unfortunately I hadn’t ordered enough paper chains so Rob, bless his heart, had to sit there and make some more. Work is sometimes bizarre when you sit there making paper snowflakes or chains and think really…..I’m getting paid to sit here and do this!! I’m not complaining but it does sometimes strike you as somewhat odd the things we have to do in the name of work.

Both windows started to come together, the idea was that each window has lots of presents in the drawers and blanket box and everything should be wrapped in white paper. Only issue was we were somewhat lacking things to wrap up so I still need to find more stuff. I got the bed dressed and put in the pressies and it was starting to look pretty promising.

The trick is you have to keep going outside and seeing how it looks and adjusting things. It wasn’t until it started to get dark that you can really tweak the lights etc to make the most of the display. We were initially a bit dubious about it being so white, but as the day grows darker, it works really well with some warm fairy lights. There are still a few tweaks to do in terms of filling it with more presents but all in all, I’m really pleased with it. 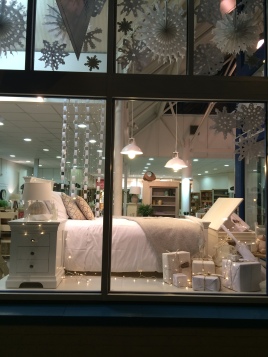 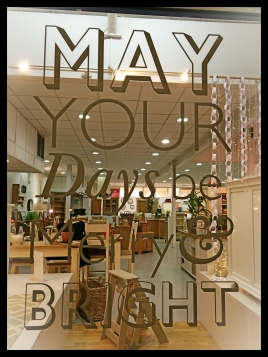 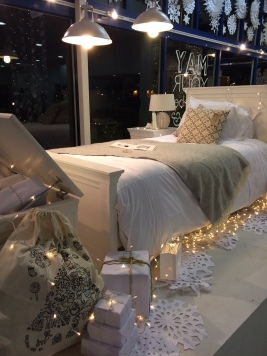 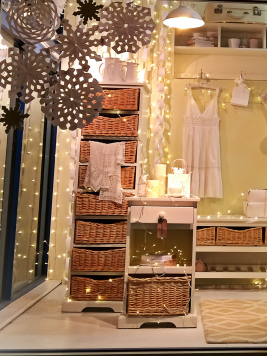 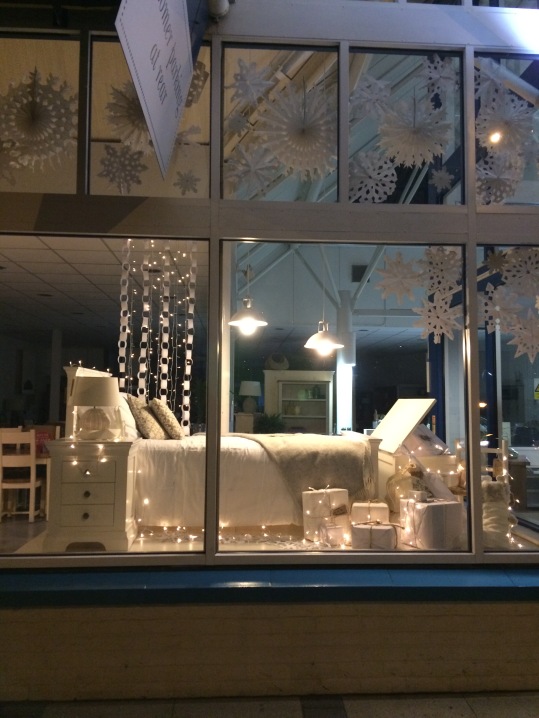 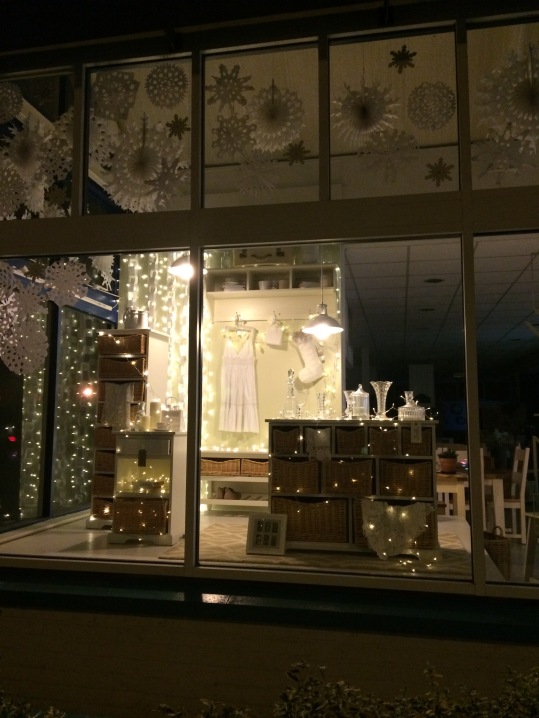 We’ve since put up the tree in the foyer and have loads more snowflakes hanging up in store too to carry the theme on throughout the store. So that’s Christmas all set up and as the window says….’May your days be merry and bright’ x