So today is Norfolk day and happens to be our day off which is handy although the heatwave is still in full swing  and is getting a bit beyond everyone’s comfort level now. I love sun, I love good weather but when it hits 30 degrees and beyond and your air con in the car doesn’t work – the novelty starts to wear thin.

Being that it is Norfolk Day we had to head upwards a bit as we needed to pop into Norwich anyway so we carried onto to Woodbastwick which is near Wroxham and went to the Fur and Feather for a nice cooling drink.

We’ve been here a few times before for family meals but never really just stopped off just the two of us for a drink. It has a really good sized beer garden and it’s a beautiful looking pub as you can see.

Norfolk Day was getting in full swing here too as Archers Butchers had set up and burgers and sausages were starting to sizzle plus this is a Woodfordes Brewery so always a good pint to be had here.

Given the heat we just went for a lime and soda each as you need something cold and refreshing in this weather but it was so lovely to sit in the beer garden and we chose a table right near one of the county hares from GoGo Hares . His name is Hareatio Nelson and he’s the first county hare I’ve seen so far and very nice he was too. 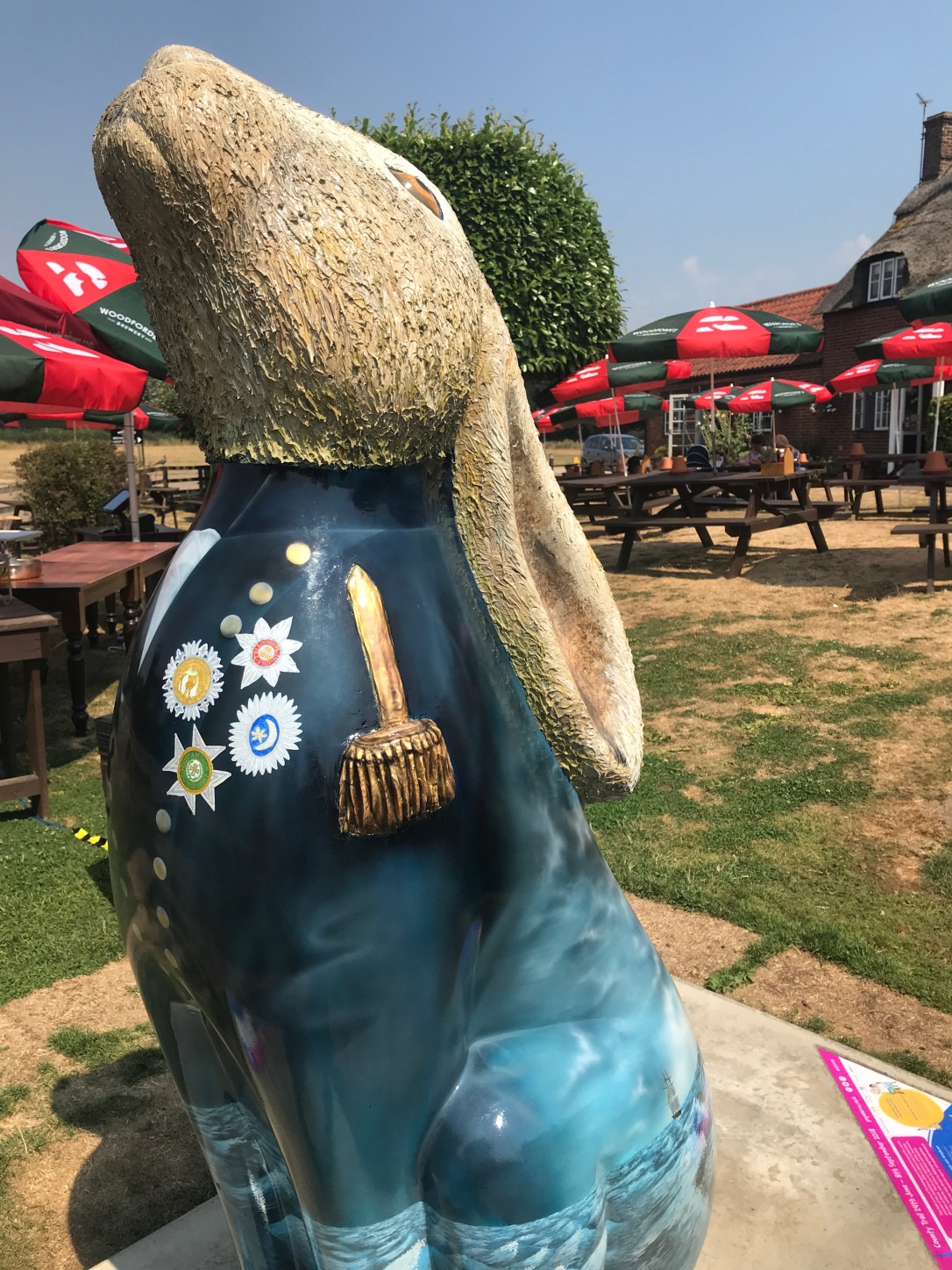 The pub has a lovely Woodfordes shop behind it with loads of lovely goodies to tempt you into purchasing. I’m not really a beer drinker so I always make a beeline for the gin section and the Black Shuck gin range. There’s no bad gin in my opinion.

SplendidChap met up with his friend Adam who works there a small a graphic designer and who came up with the fantastic new Nelson logo for the company which was pretty cool to see his work on all the products.

It’s a really lovely place to visit either for a quick lunch if that’s all you have time for but more for a chilled out long lunch or a great catch up with friends over an evening meal. It’s not a place you feel rushed or want to be rushed away from so if you have a special occasion coming up, or like ,e, you don’t need an excuse for a great meal, then I’d recommend visiting the Fur And Feather, Woodbastwick.

You know when you’ve had a great weeks holiday and you go back to work and feel like you need another holiday? Well that’s me right now, we came back from hols at the weekend and went back to work yesterday and we both definitely have the post holiday blues.

I’m sure we can all relate to getting to a stage when you’re ready for a holiday, everything annoys you, no one can do anything right and you just want to pack up and leave it all behind. That’s where we were at, we hadn’t been away for over a year so we were really looking forward to heading up North.

We went up to Scotland for a week to catch up with my sister in law, her hubby and their little bubba who will turn one in September.

Now it has to be said, when you live south of Norwich, Scotland is a bloody long way away and it’s not like you hit the border and you’re there, Scotland is huge! That false sense of relief when you pass the Welcome to Scotland sign and then the realisation that you have another 3 hours to go. We were heading for near Forfar which is close to Dundee. We did cheat and split up the journey a bit and stayed in Roslin for the first night. If Roslyn rings a bell, there is an amazing chapel there as featured in the Da Vinci Code film with Tom Hanks. It’s a beautiful place and we had a bit of jaw drop moment when we walked in. You’re not allowed to take photos inside the chapel so here’s a few from the outside, you’ll have to visit yourself to see the inside properly or watch the film again! 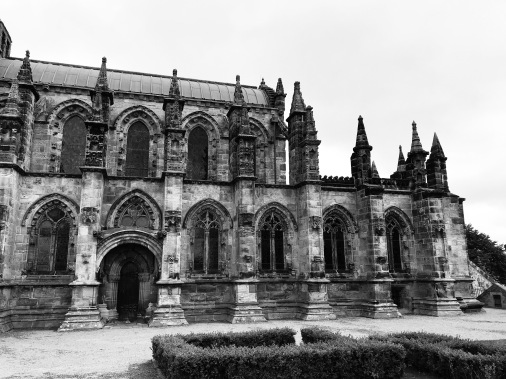 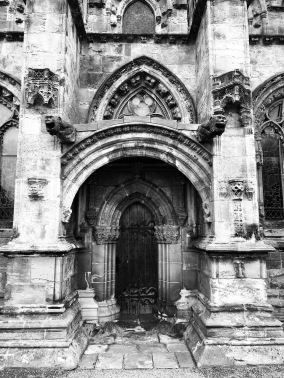 We stayed in a traditional Scottish Bothy which is a small cottage which were traditionally used by farm workers or kept for use as a mountain refuge so they are generally fairly remote and come with great views! 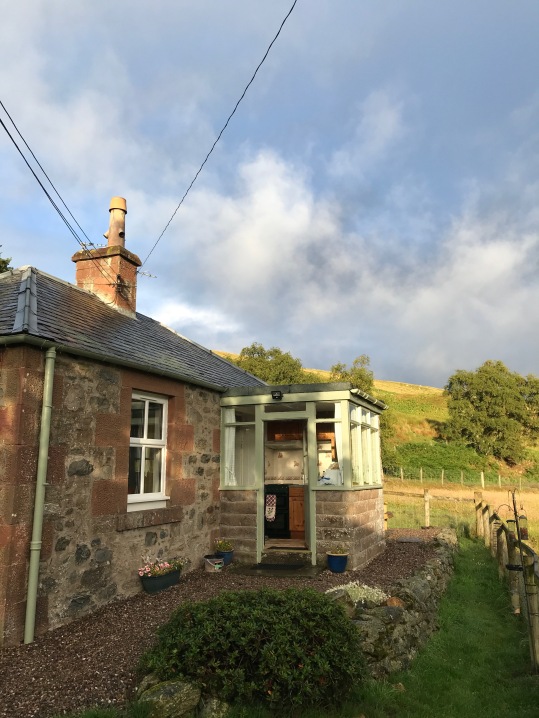 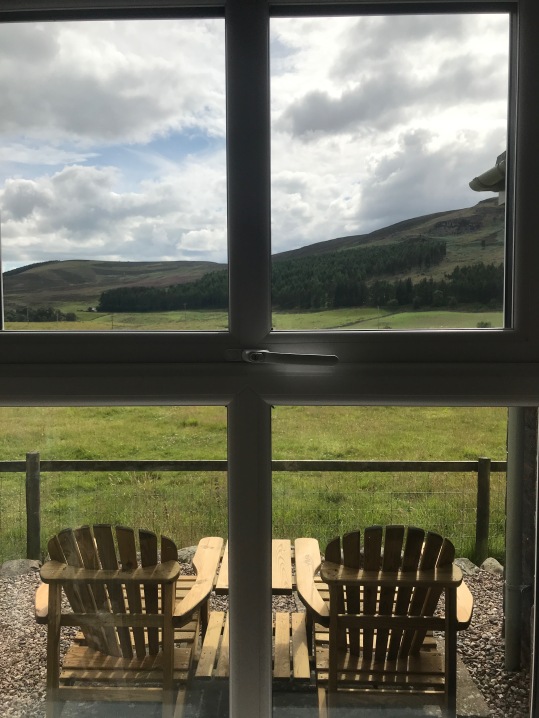 Ours was really sweet, all that we needed and I’m sure we’ll rebook the same place next year. We chose this location as it was a 20 min drive from family and near a couple of walks we had ear marked to do.

So Scotland isn’t known for its good weather, it’s pretty much renowned for being wet, grey and moody. The last time I saw sun in Scotland was my first trip there around 15 years ago which was my first holiday with Splendid Chap.

This time however, it did itself proud, the heat wave that has hit the country has spread so far north that even the glens and lochs have felt the warmth of the sun. Scottish scenery can look very dramatic whatever the weather but seeing the sun basking down on such a spectacular landscape can be a little awe inspiring.

We were recommended by the Bothy owner Sue to do a walk at Corrie Fee and she said that it had real wow factor. It involved an hours walk up through the forrest which was a slow burn uphill which my Norfolk legs aren’t used to and I’m not particularly fit but with hubbys motivation I kept at it and boy was it worth it! 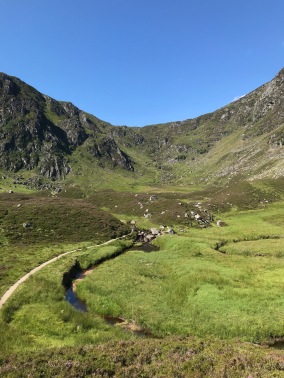 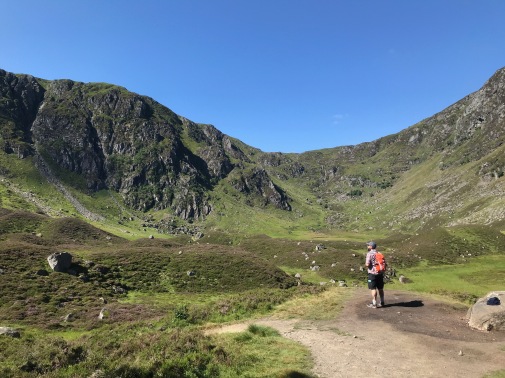 This to me is Scotland at its best. This kind of view makes everything else disappear, your worries, your gripes, your insecurities – they all pale into insignificance when looking out at something so beautiful.

We had a brilliant week and it was just what we needed. The great outdoors, sun, family – it was the perfect way to recharge our batteries. Thank you Scotland.

No, this isn’t a post about Wham or George Michael although I could quite happily chat about him until the cows come home. This is about the wonderful city of Norwich, the place where I work, being home to GoGo Hares.In case you haven’t got a clue what I’m talking about Break Charity have teamed up with Wild In Art to create a large scale art sculpture trail. This involves 50 pretty big sculptures of hares around 5ft tall, all the same design, but individually painted by different artists to create a unique trail in the city. The hares are positioned all around Norwich and set up as a trail and numbered so you can explore the city and collect all the hares. 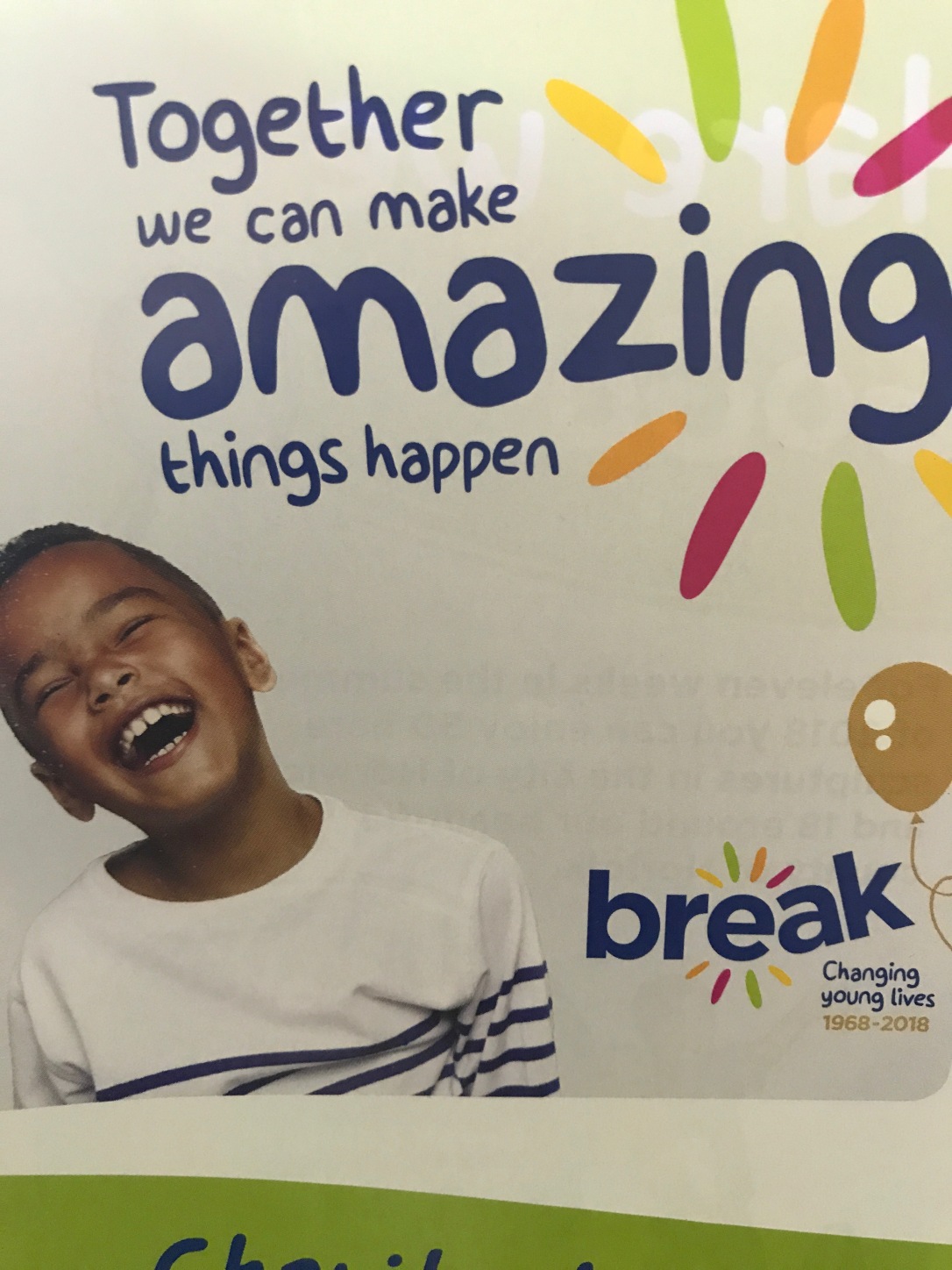 This concept follows on from GoGo Gorillas back in 2013 and then GoGo Dragons in 2015.  In addition to the city hares there are also 18 county hares dotted further out which are a different design and if this wasn’t enough there are 150 baby leveret hares that can be found in any variety of different shops and restaurants that form part of a learning programme called GoGoCreate which are all painted by children.The hares are on display from 24th June to 8th September and there are GoGo Hare leaflets available from places like the  Forum which contain a trail map to follow so you know where in the city the hares are located. There is also a really good app you can download where you can log the hares you’ve found by entering a unique 4 digit number. This then tells you how many you have found and you can unlock rewards and it just adds to the fun of it. 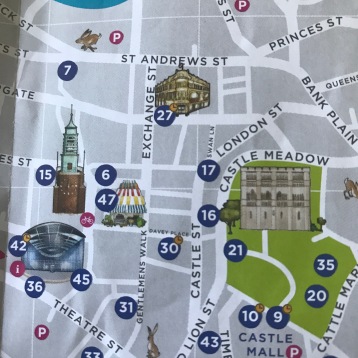 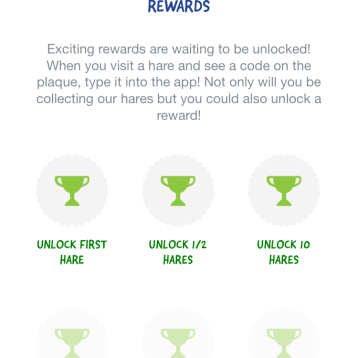 Now it may sound like you have to have kids to enjoy this but my husband and I have no kids, we’re in our early 40’s and we really enjoyed spending a day in the city looking for hares. It’s gets you to visit some parts of the city you may not normally go to. Now don’t get me wrong, you’re unlikely to do all of them in one day, I like clocking up my steps but it’s a lot of walking so I’d recommend if you’re going to do this as a family activity, possibly break it down into 2 or 3 different sessions.Because the hares are all painted by different artists, they vary a great deal. Some are based on Norwich and depict scenes from the city and some are based on history and even films. This is part of what makes it such fun that there is such a variety of styles and subjects. Here are a few of my favourites. 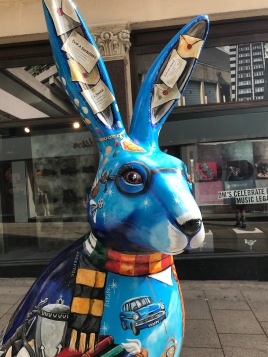 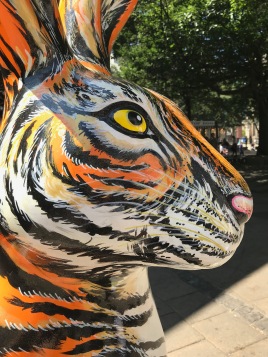 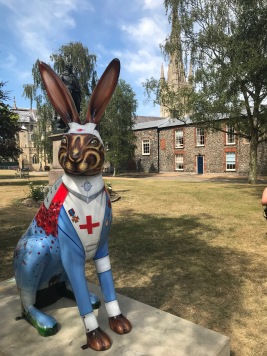 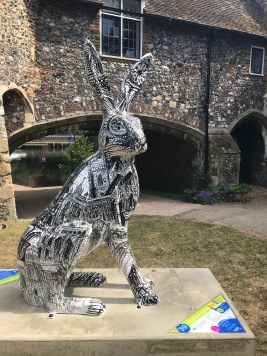 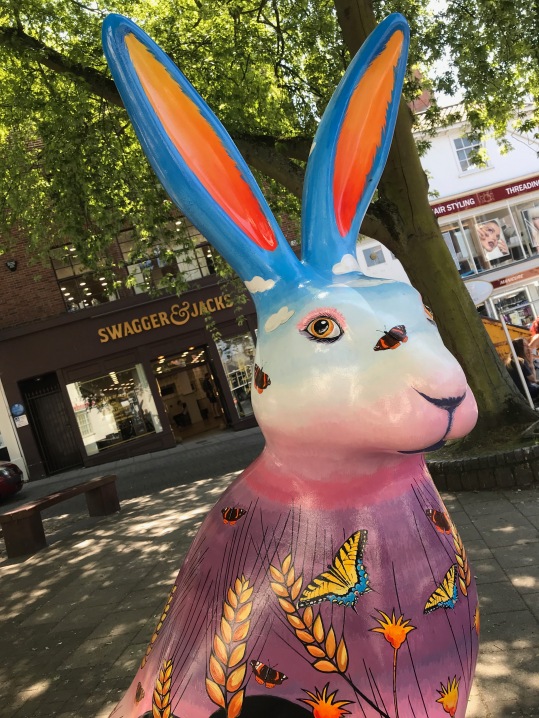 I’ve still got 7 city hares to find and haven’t seen any county ones yet.All 50 hares will be auctioned off to raise money for Break on Thursday 11th by auction house TW Gaze.  is a registered charity and works tirelessly to make life better for vulnerable children, young people and families.It really is a great idea and a fantastic addition to an already wonderful city and I’d wholeheartedly recommend spending a day on the hare trail.

So can we just ignore that it’s been two years since I last posted? I’ve no excuse, just life got in the way but I’m in a good place at the moment and feel like I owe to myself to get back into blogging for my own sanity if nothing else.

I’ve started another site on a different subject and have really enjoyed having something to focus on and I was going to let this one go but I’d already paid for the domain renewal so I figured, why not get back into it!? So here I am, back to trying to get a site that looks as good as I can get it and frustrated that it’s not as good as other people’s, but it’s a learning curve and I’ll get it looking better the more I try. I’ve always said everyday is a school day.

So what’s happened in the past two years?  Work, holidays, making memories, I have a new niece which has been amazing and I lost my boy cat Freddie which was quite literally the hardest thing I have ever had to go through. I’ve come out the other side of depression now, hence me trying to focus on new pastimes like my blogs in order to keep my mind set on the positive things in life and to always look forward.

I’ve come to realise that life is full of colour and needs to be grasped with both hands and enjoyed as much as we can. It’s too short a time here to let people bring you down and make you miserable, they need to be cut free and only fill your mind with positivity in order to live your best life.